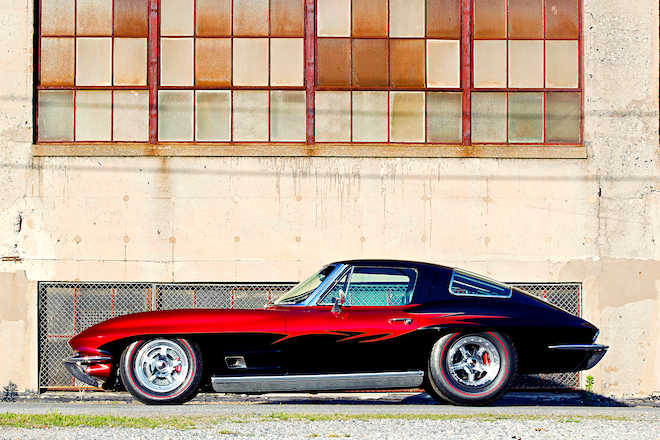 Why this all-out C2 Corvette hasn’t graced the pages of Vette magazine until now is beyond me, but better late than never! Dubbed Black Widow, this split-window coupe was built in 2012 for Rod Saboury, a drag racer who made a name for himself back in the early 1990s during the Fastest Street Car drag racing days. The car was built to go fast and look good doing it, and if the looks have yet to widen your eyes, the engineering underneath the iconic body certainly will.

Before uncovering some of the marvelous details of this Pro Street Corvette, it’s worth mentioning where the car has been over the past five or so years. After it was completed, it made an appearance at the 2012 SEMA Show in Las Vegas then sat in Rod’s garage and driven occasionally. In 2015, Rod decided to sell the car at Mecum to free up funds for other projects he was working on. The car was sold to a gentleman named Paul who, due to unfortunate circumstances, was forced to sell it after owning it for just a year. But, Paul wasn’t going to sell the car to just anyone. He knew well the history of the ’63 and its previous owner and wanted to make sure it would go to a fitting home.